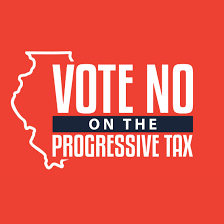 On November 3, 2020, you and I will have the opportunity to significantly impact Illinois’ fiscal destiny and, as a result, your fate, and that of your neighbors.  Yes, it is a heavy responsibility that has been thrust upon us. This will be one of the most important votes we ever cast. Given this importance, I have set out to educate you before you cast your ballot.

Illinois currently imposes a “flat” income tax rate. This rate started out at 2.5% in 1969, was as low as 3% in 2010 and is currently 4.95%. Interestingly, throughout my 37-year career in the tax field, there has been a constant cry for the federal government to adopt a “flat tax”. Flat tax rates are deemed by many to be fairer. Why then would Illinois want to change from a “flat tax” to a graduated one?

Many years of bad policy and corruption have left Illinois’ finances in catastrophic condition. Illinois currently has a $226 billion shortfall1. The graduated income tax proposal is our government’s attempt to fix this problem. Unfortunately, if passed, this amendment will not fix the problem but will exacerbate the situation. High income taxpayers, those with the most mobility, will continue to flee Illinois for lower tax states. I have witnessed this in my own practice where I have seen an increasingly large number of my clients leave Illinois each year. In 2019, Illinois lost population for the sixth straight year – and it lost more residents than any state this decade.

Governor Pritzker has spent $51.5 million of his own money promoting passage of this amendment. I am sure you have seen the ads. Please note that these ads and the promotion to pass this amendment are misleading. Proponents of the graduated income tax state that only those making more than $250K will pay more taxes due to the higher rates. Do not believe it! You are not voting on a graduated tax rate structure. The amendment, if passed, would simply give the government the unrestricted ability to set different rates for different income groups. Those rates would be determined sometime in the future and could change at any time. Once a graduated rate structure is in place, the government will be free to manipulate those rates as they see fit. And guess what, when the high earners flee the state and take the corresponding tax revenue with them, the government will be forced to raise rates on lower-and middle-income earners to make up the difference. Do you trust Illinois’ corrupt politicians with the power to set varying tax rates on different levels of income? Remember, Illinois politicians told us that the tollways would be paid off decades ago and tolls eliminated!

It is enticing to believe that taxing higher earners will solve Illinois’ fiscal woes. Let us examine history. In 2017 Illinois politicians passed the largest tax hike in Illinois history, a $5 billion tax increase, raising the individual income tax rate from 3.75% to 4.95%. On July 1, 2019, $4.6 billion in tax and fees hikes took effect. That is an enormous amount of new revenue. Did it solve Illinois’ fiscal problems? Nope. These tax increases completely ignore the elephant in the room – Illinois’ pension debt. Pension reform should be on the November 3 ballot, not tax increases.

Illinois does not have a revenue problem. Illinois’ real fiscal problem is overpromised pensions. Over the years, Illinois elected officials from both parties made disastrous decisions that have saddled us taxpayers with an untenable pension situation: State workers can elect to retire in their 50s. Contracts allow for end-of-career salary spikes which boost pensions. Pension recipients receive a 3 percent automatic, compounded cost-of-living increase regardless of the rate of inflation.  The result? Teachers who work 30-plus years can expect to collect $2.9 million in benefits2. Wirepoints, an independent, nonprofit company delivering original research and commentary about Illinois’ economy and government, compared Illinois’ pension promises to those of its peer states - the nation’s five largest and Illinois’ neighbors. Predictably, Illinois’ benefits were the largest by a significant margin.

Pension costs have overwhelmed the Illinois budget and spending on core government services. Pension contributions now consume more than 25% of the Illinois’ general funds budget, up from less than 4% during the years 1990 through 1997. State spending on public pensions has increased by more than 500% during the past 20 years, after adjusting for inflation. All other spending, including social spending for the disadvantaged, was down 32% since 2000. Addressing the pension burden is unquestionably the most important action our elected officials can take. Why aren’t they?

Do not be misled. Passing the graduated income tax will only allow Illinois politicians to continue to kick the can down the road and delay the inevitable. Denying them this temporary sugar rush will force them to take real, meaningful action to correct Illinois’ fiscal imbalance. Maybe then they will get serious and address the Illinois pension debacle.  Vote no on the proposed amendment to implement a graduated tax.

To become more informed on economic issues facing Illinois residents I encourage you to check out the Illinois Policy Institute https://www.illinoispolicy.org/, Wirepoints https://wirepoints.org/ and Truth in Accounting https://www.truthinaccounting.org/.